Why we walk dogs together
but not in a pack

In May 2017 Gosport Borough Council introduced fines for anyone walking more than four dogs at a time. Since we opened in 2007 part of our ethos has been to never pack walk; anything more is unfair on the dogs, the walkers and others we meet on our journeys.

We all know that dogs love going for walks. As a pet care company that offers dog walking as one of our services, we rarely come across a dog that is not overjoyed at the prospect of getting out of the house. Not only are walks an excellent way of keeping a dog fit and healthy, it also burns off all that pent up energy and gives them the new and stimulating experiences that they need.

However, they usually love to socialise with other dogs – just see how quickly they make friends with others they encounter when they are out! This is why we often walk dogs in pairs, three's or fours (from a maximum of three homes) as these provide three of the important things that a dog needs; play, socialisation and enrichment.

All of our dog walkers go out armed with treats and a toy or two, and they are there to facilitate fun playtimes. Just watch a small group of dogs at play and you quickly realise that what they enjoy most is chasing each other and burning up energy. We always make sure dogs are matched well to become the perfect play partners.

Dogs, just like their human owners, usually like to make friends and you will quickly notice when a dog likes the company of another dog on a regular walk. If they seem fretful or hang back, this probably means they do not like the other dog’s company so we find them another walking companion.

Some dogs are very timid and stay by their owner’s side when walking alone. This deprives them of the stimulation of exploring new environments that is important for their development and overall well-being. We gradually introduce them to other dogs, with the owners consent, and they quickly join in discovering new and exciting places and smells.

It’s safer, in our opinion, for our walkers, other open space users and the dogs when we have a small number of dogs. We can easily keep a trained eye on all dogs, especially those who are safe off lead, as well as ensuring we notice any toilet stops so we can pick it up!

Why we don’t pack walk

As well as the obvious benefits of small group dog walks listed above, there are a number of negatives to walking in large packs:

Every dog owner knows how difficult it is to keep an eye on their own dog, imagine what it is like trying to control five or more!!  Busy roads, livestock, other dog walkers, cyclists, people and children and unfamiliar surroundings, provide a real risk when there are a group of dogs.

Dogs mixing in a large pack walk can run a real risk of transmitting illness and disease from one to another no matter how careful the owners or walkers are.

The bigger the group the more likely it is for fights to break out or some of the smaller, more timid dogs to get picked on so that this dominance can be established. Stanley Coren, psychology professor and neuropsychological researcher, states that in some cases, such forms of rough play can produce antagonistic relationships and attitudes. This is not uncommon when dogs have been allowed to run in an off-lead park area or have been placed in a doggie daycare where they interact with dogs of mixed sizes and temperaments in a generally unsupervised way. Under such circumstances, dogs may actually develop a general hostility or fear toward all unfamiliar dogs rather than acquiring canine friends.

These can happen in an instant and the more dogs there are, the harder it is to keep them all safe from dangers – from the environment or each other. All of our dog walkers are pet first aid trained, so they can respond in an emergency. The likelihood of something else happening when you’re tending to one dog if there are endless other dogs running around would be, we imagine, quite high.

It’s common sense to think that, if one of our dog walkers is 11 stone and they’re walking six 8 stone large dogs, they’re going to seriously struggle to keep them under control, even if they only pull! 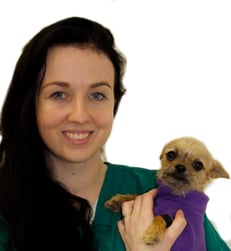 ‘I feel the point to bear in mind with pack-walking is that dogs cannot be expected to get along 100% of the time, just like humans, and when excitement levels run high what would normally be a small disagreement between two dogs can turn into a multi dog fight very quickly. A few months ago we had an older Jack Russell Terrier brought in to the clinic, who lives on a farm with a large number of dogs. Every day they go on a big Pack walk but this day for some reason she fell out with another. The rest of the dogs got involved and three surgeries, multiple stitches and months of recovery later she has now been rehomed because she doesn’t tolerate any dogs at all anymore. The owner was also bitten trying to get her out of the dog pile and no longer walks the dogs on her own.

Yes, I do go on Pack type walks but it is always 1-2 dogs per person, all of the dogs are less than 30kgs, everyone knows each other (dogs included) and we all work in the vet clinic. Even so, there is still the occasional minor injury, but because there’s less to control we stay in control! 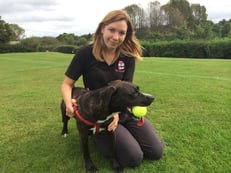 I tend to remind people dogs are like us they aren’t going to like every dog they meet! Even if they get on ok with those in the pack if another dog runs into the mix that they aren’t keen on the walker won’t be able to help them.

“There’s a difference between coming home tired and happy and coming home exhausted because they’ve been avoiding another dog in the pack bullying them or a boisterous dog chasing them non stop”.

A lot of behaviour problems stem from being forced to tolerate a situation dogs aren’t comfortable with or being allowed to get away with inappropriate behaviour because it’s not being monitored properly. Pairs or threes means we can match dogs who are similar ages, enjoy the same things and can get the most out of their walks. They also allow us to add more enrichment and monitor dogs interactions so we can make sure they are really enjoying themselves. It also means less time cooped up in the car!

In summary; our final piece of advice, if you are considering letting your dog join a pack walk is – don’t! When it comes to group dog walking, the smaller the number the more the benefit and the less the risk.